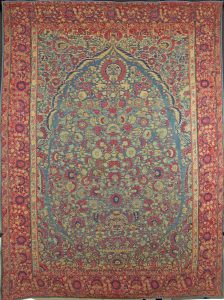 The basic format follows in the pure Mughal tradition of a bouquet of flowers bursting in bloom from a decorative vase all within a graceful Islamic niche formed by an arch composed of cusped two-tone leaves coming from either side to join at a central apex just above the bouquet’s  majestic top ‘ferris-wheel’ radial flower. 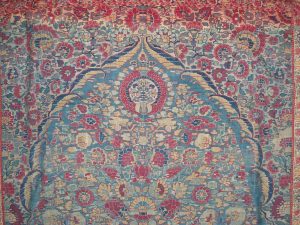 On a teal ground, the elaborate vase sits upon a piano keyboard-like dish which itself is raised upon a small mound. The bouquet is delimited by a narrow unadorned space that separates it from the arch serving to highlight the bouquet’s efflorescence and to add a dynamic graphic dimension. The spandrels are filled with circular, or flattened roses. The two bright vertical inner guard borders (hashias) are woven on white silk warps  and patterned with a four blossom meander. The horizontal top and bottom hashias are of identical meanders but woven with pashmina only threads. Through the process of ikat, visible at the top and bottom, it’s possible to see how the teal field slowly dissolves into the reddish colorations of the borders, an indication that the weaving was done seamlessly all on one loom. The large outer borders comprise a repeat of deep indigo blue and madder red floral rosettes on a red ground. For the outer hashias, a sinuous vine rolls over and under red and blue flower buds. 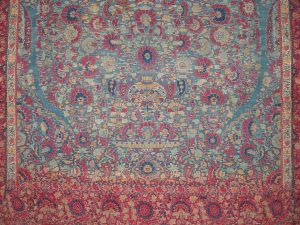 The serrated, two-tone leaves of which the spandrels are composed, exhibit a tiny hook at the tip- a leaf style shared by the Lyonnais piece, though on the latter they appear almost to be hooking together to form the arches. Such is not the case here. At the spandrel’s lower end, the bottom leaf trails off where is it met by a tall, serrated, floral shape, which while similar to the Lyonnais mat, is more diminutive.

Lastly we have, just under the ‘piano’ dish, a cartouche-like device appears to be supporting the dish. While its drawing is a bit off, we can only be certain it’s indeed a cartouche by observing the one in Lyon. Observing the red borders we find also cause for close comparison by the sequential placement of floral rosettes.

All this to say that it’s very clear these two millefleurs ‘carpets’ are sisters in disguise. One thing is clear, though. If one were to replace all the colors with those of the Lyonnais mat, one would be quite surprised by how identical they actually look, both botanically and format wise. The placement and identity of the blossoms matches closely.

Millefleur prayer hangings from Kashmir were woven mainly as treasured gifts by and for various potentates of the Indo-Muslim world. Because of their high value and symbolic importance, rarely were they used as prayer mats per se. That their history dates back to at least to the seventeenth century imperial Mughal era is borne out by the recent discovery of an unpublished example found at the Musèe des Arts Decoratifs, Paris