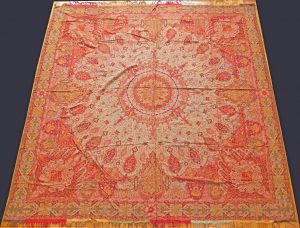 An explosively graphic showstopper that can’t help but dazzle!

Amedèe Couder’s architectural talents are catapulted to vertigenous heights with this masterpiece. Perhaps his most famous rumal, the Isphahan, 1834, which contains quasi-buidings, is dated and signed with inscriptions in Farsi. However, from the point of view of aesthetics, the GOTHIC  SUNBURST (GS) outshines all his other works by a large margin.  As a wall-hanging it’s spectacular. His most famous shawl, the Nou-Rouz, 1839  (Iranian New Year) was also a tour-de-force not only in loom engineering but in creativity in adapting an intricately detailed architectural drawing to the then state-of-the-art loom technology.

The GS is infused with all the marvelous vegetal dyes typically deployed in the weaving of the Isphahan and Nou-Rouz; the soft wool and weave texture.

The design’s parallels to church stained-glass are obvious as in the example below from Notre Dame, Paris. In fact, much of Couder’s drawings, sketches and shawls appear to have adopted in some small way, ideas from Medieval and Renaissance churches* and French tapestries.

It seems clear to me that Couder, sitting at his work table, 184 years ago, began with marking out a tiny eight-pointed yellow star center, placing it against another of light violet hue, then proceeding to sweep bold curved lines around the violet star’s edges creating an even larger eight pointed star. Now we have an image resembling the depictions of modern day atomic drawings of electrons and protons whirling around a central mass. The next circle he forms by linking 24 church steeples replete with their distinctive crosses. This is surrounded by a linked neckless of burgandy-red ‘stones’. What happens next is almost to complex to describe but let us just say that the next concentric circle comprises bizarre motifs which at every 45 degrees features a tall protrusion, something like a Medieval sword handle whose elongated pomel sits atop a ram’s horn quillon.

The eight ‘handles’, forming a kind of mariner’s compass, find themselves contrasted against a marvelous light blue field of of delicate vines. Across this field we come to a series of radiating ogival medallions with tripartite escutcheons pointing towards the center.

Now we come to the borders and large corner decorations the latter of which are composed of a large medallion with a small lobed center within a radiating motif. Let us just say that everything drips with jewel-like minutiae, curves, curlicues, pendents, rococo shapes, dragon-like leaf structures and most distinctively, Couder’s signature pattern, the endless knot.

The choice of colors is done to perfection. Each tonal section not only contrasts in its juxtaposition harmoniously with the next but has been chosen also for maximum highlighting of the pattern it brings to life. 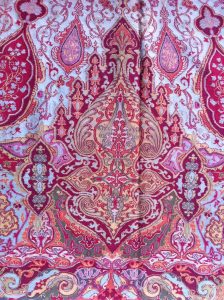 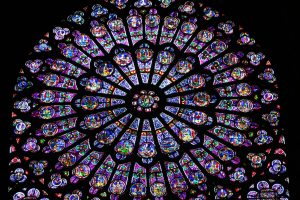