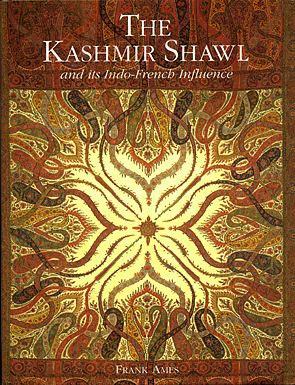 Widely held as the definitive work on the history and development of the Indian and European Kashmir shawl, this up-to-date fourth edition is by popular demand brought to you once again with all the significant revisions and additions not found in previous editions.

The book attempts to define and classify the Kashmir shawl, analyze the wealth of images and symbolism found in its finely ornamented weave and place its development within the context of four major periods of Kashmir’s history: Mughal, Afghan, Sikh and Dogra.

These rare and beautiful illustrations have been assiduously assembled over a period of many years from major institutions in three continents: the 17th and 18th century Mughal shawls alone in the book’s ‘Illustrated Guide” represent the largest single grouping of such pieces found anywhere.

The chapters on the development of the French and British Kashmir shawl against the backdrop of the emerging Jacquard loom engineering represent important contributions to the history of textiles in Europe. Written with insight and the passion that comes from collecting over many years, the book explains how all of Europe fell sway to the genius of the French designers and architects who established high standards for its creative designs- designs that foreshadowed years in advance the style of Art Nouveau.

The chapter, The French School of Design, is copiously illustrated with about 50 of some of the rarest and most beautiful signed and dates shawls, many from the brilliant hands of France’s gifted 19th century artists, such as Berrus, Hébert, etc. And the profile on the enigmatic and genius character of the architect, writer, and industrial designer Amedee Couder and his family is brought to life not only by his fabulous shawl designs but also by an in depth look into his philosophic writings and architectonic ideas. Couder takes credit for some of the most innovative advances in early jacquard loom technology.

Ames’ persevering efforts to establish a clear historical perspective to the development of a powerful Himalayan weaving industry have been hailed by many curators and academics. Veronica Murphy, erstwhile curator of the Indian Dept. of the V&A Museum has called Frank Ames’ work ‘monumental’. About Mr. Ames’ work on the Sikh period, indologist and Professor Jean-Marie Lafont exclaims: “…the dynamism and the originality he was able to discern in this production must be acknowledged as a significant contribution to a major artistic expression in the [Indian] subcontinent.”

Contains a very useful and invaluable  ILLUSTRATED GUIDE  showing the chronological development of Kashmir shawl patterns from the 17th to the 19th century.