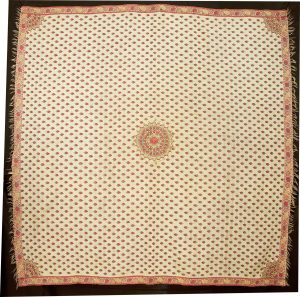 What’s exciting is that this could be one of the oldest moon shawls known. It’s certainly endowed with all the attributes of what we know about the early ones: tiny central and quarter medallions and an overall diminutive size. However, what makes it stand out from all others is its large patka-like border containing botanical elements found only on 17th shawls. 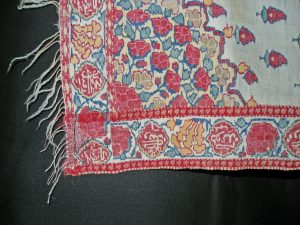 Style and Aesthetics: In general the smaller the central medallion (and likewise corner medallions), the older the rumal. In this calligraphic rumal we have strong indications of not only early age but clear signals of a draftsmanship echoing the Mughal era in which it was woven. Outstanding are the large hashias of unusual clarity and free spacing,the bright white ground highlighting their bold botanical elements. Two inscriptional cartouches alternate within the repeat. In the cartouche that seems to have two parallel lines across its center contains, according to Professor Wheeler Thackston, Harvard’s erstwhile professor of Arabic,

“the Arabic عمرطویل ‘umr ṭawīl (long life) and then something that looks like KM (کم) on top that doesn’t fit grammatically or by sense.”

The white silk warps of the vertical borders were a standard weaving practice of Kashmir, found on almost all shawls, providing a smooth surface to tightly pack the pashmina wefts, greatly enhancing the design. However, horizontal woolen borders invariably got corrupted and often it was difficult to find a matching correspondence between the two patterns. In this moon shawl we find the spirit of a master weaver who proudly celebrates his pious intentions all four sides with precision and perfect clarity

Besides the calligraphy, the most unusual botanical element is the cluster of the three yellow flowers that alternate between the cartouches. In forty years of studying world collections I’ve seen this particular floral style- and rarely at that- only on shawls and textiles of unquestionable 17th century provenance.